The overwhelm-shutdown: why ADHD leaves us stuck 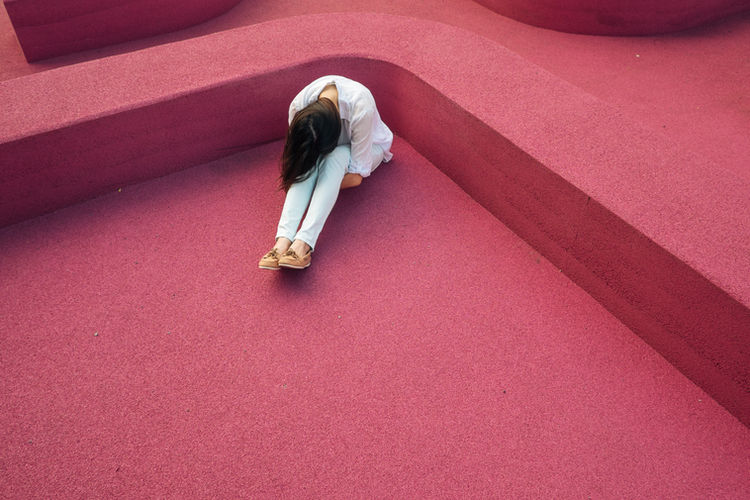 There it is: that dreaded "stuck," frozen feeling.

Too many things have piled up on the to-do list. Too many assignments put off until later in the semester. Too many emails you told yourself you’d respond to weeks ago. Maybe writing an article that you thought you’d finish ten weeks earlier… It starts when I’m overwhelmed by things I have to d o— thinking about how long I’ve been stuck, or how to explain the reason why it took me so many weeks to respond to a simple email.

The tasks themselves don't need to be hard. Often, it’s the simpler things that build up. A phone call; an email; an assignment that I know down to my toes that I could absolutely do; hanging up a shower curtain; writing this article. I want to do it — I need to do it. But before I know it, I'm shutting down. If you have ADHD as well, this “shutdown” might sound familiar to you, too. You don’t know where to start, there’s too much to do, and you feel as though nothing can be done, because even just thinking of doing what you need to do feels like an insurmountable task.

So why does this overwhelm/shutdown cycle happen? Let's unpack it.

Why are ADHDers prone to the overwhelm-shutdown cycle?

1. Our executive functioning is impaired

2. We procrastinate for the adrenaline

Those with ADHD are more likely to procrastinate on dreaded tasks. Some of us need the adrenaline rush and pressure of a quickly-approaching deadline to feel enough stress (energy) to motivate ourselves into action. Our brains have learned that delaying these tasks will eventually lead to the necessary energy to complete a task, which is why we're likely to repeat this, even without realizing it.

3. We shut down to reduce anxiety

With a deadline fast-approaching, we tend to struggle to cope with the emotions that surface. Anxiety can exacerbate the procrastination, and the procrastination can exacerbate the anxiety. These become difficult-to-break patterns, feeding into themselves. In the midst of this cyclical anxiety, our bodies have learned that shutting down completely is an effective way to disrupt the overwhelming stress we're experiencing (which, predictably, only makes the situation worse in the long-term).

Part of why this happens is because when we're faced with this amount of anxiety, we go into fight, flight, freeze, or fawn response — and many times, we choose to freeze. This “shutdown” is actually a more reasonable response to stress than it may seem.

4. We fixate on past failures

We might begin to recall the many times before we've felt stuck. This feeling of dread associated with prior failures may also prevent someone with ADHD from being able to begin or complete a task. Because of how society is structured around neurotypical minds, people with ADHD often do not have the treatment or resources or knowledge or skills they need to be able to complete the necessary tasks. We're more likely to have experienced failure within those neurotypical institutions before, and be more afraid of failing again.

There’s a lot of shame and stigma surrounding procrastination and ADHD. This can make it hard to begin the process of doing something you’re already afraid of failing at.

Science says: it starts with dopamine

Part of the science behind why this happens is because ADHD often results in what is sometimes called a “Motivation-Deficit.” One thing that contributes to this is a dopamine deficit that researchers have linked to ADHD. Dopamine is a neurotransmitter associated with motivation, memory, and reward and pleasure pathways. Dopamine is what helps us become motivated to begin a task and follow through to completion.

With irregular dopamine receptors and a deficiency in dopamine production and/or availability, those with ADHD tend to have a motivation-reward deficiency In other words, not only is your motivation for doing something diminished, but the reward you feel for doing it may be diminished as well. This means that tasks that you aren’t innately excited about at that moment may feel excruciatingly difficult to do.

Another reason why those with ADHD may not have sufficient levels of dopamine is because dopamine needs to stay in the synaptic cleft for a longer duration in order to help you concentrate. ADHD brains typically reuptake dopamine more quickly, leading to difficulty in focus.

Translation: We're a little too eager to use up the little dopamine that we do have, which means it doesn't stick around for very long. Some of the medication options for ADHD work by blocking the reuptake of dopamine, allowing it to remain in the synaptic cleft for long enough to be effective. This is one reason why medication is often found to be very helpful for those with ADHD, particularly when combined with skill-building.

Be kind to yourself. It's not your fault.

With understanding these challenges, we can see it's not a personal failing on our parts. ADHD presents unique challenges, and this happens to be one of them.

My hope is that, by better understanding how and why this shutdown happens, we can give ourselves a little more grace — and combat some of that shame and stigma that we so often experience. We can forgive ourselves for the fact that we may simply not be wired in a way that gives us the greatest advantage in a neurotypical society. We can better communicate our struggles to those around us, so that they can provide us better support, like additional deadlines and checkpoints to increase our sense of urgency earlier in the process. We can find skills, strategies, and treatments that do work for us. With practice and experimentation, we can learn how to come out of this shutdown state.

And with those skills in our pockets, we can make the world work for us a little bit better, so that we can get unstuck, and join it.

Zipporah Arielle (frequently goes by the pen name/nickname "Coffee Spoonie") is a Nashville-based writer who covers topics like disability, Jewishness, culture, and more. They can be found scrolling through their phone on a couch with their dog.