ADHD can lead to nail-biting, hair-pulling, and skin-picking

How could I waste so much time doing something so harmful to myself? 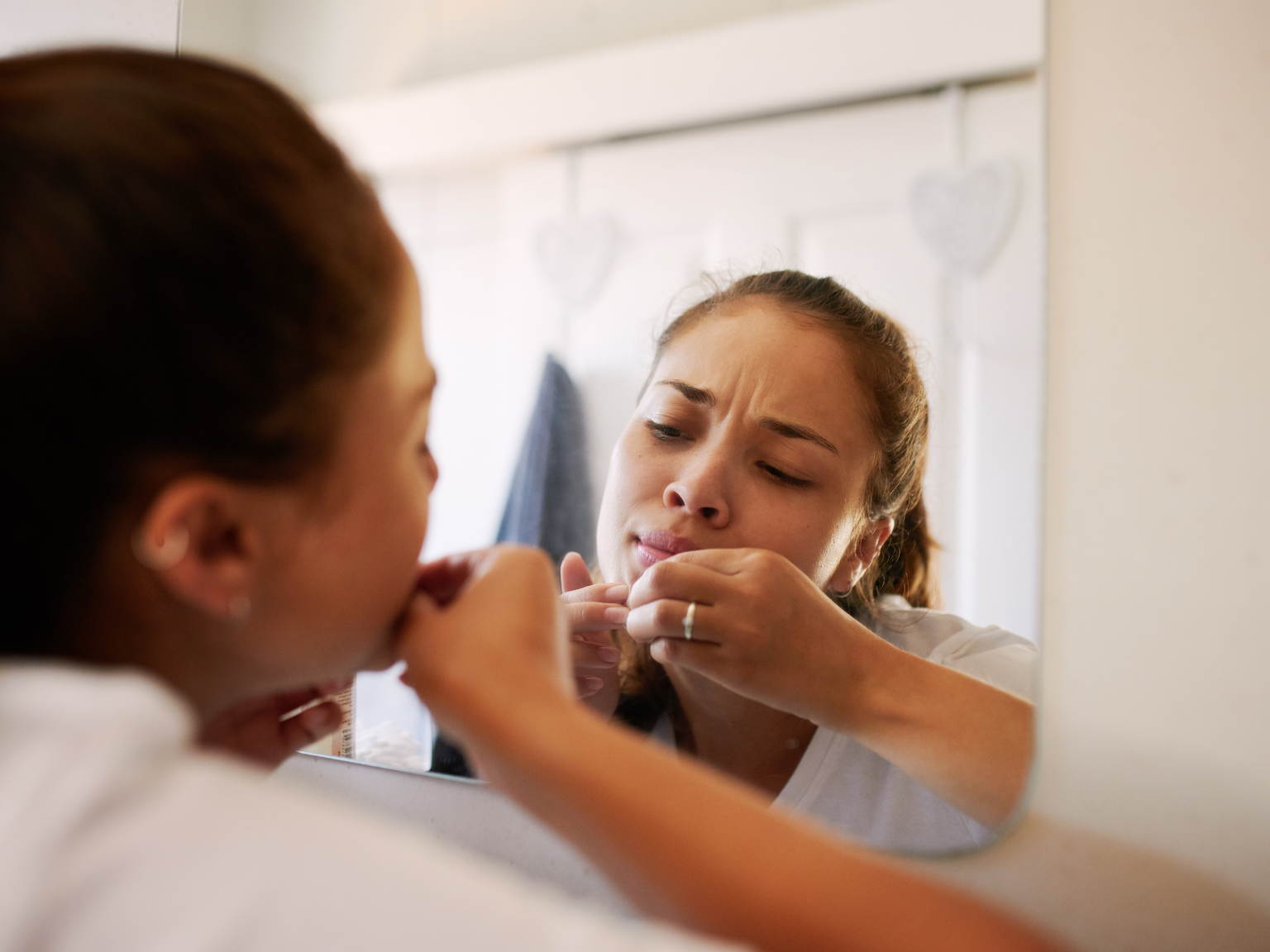 I have a confession to make: I pop my pimples.

Actually, it’s not really a huge confession. I do it all the time: in public, in private, when I’m nervous, when I’m bored, when I see my reflection and notice a blemish…

I used to be a lot more ashamed of this habit because I’d been told by many family members over the years that I was going to end up with terrible scars and only make things “look worse.” I didn’t know how to tell them that I felt like I needed to pop my pimples. Even while writing this blog, I notice my skin tingling—my hand wants to pick at blemishes on my face and shoulders, scratch the dry skin off my back, or feel around that painful bump that’s forming on my forehead.

If you know exactly what I’m talking about, you might want to keep reading.

Body-Focused Repetitive Behaviors are impulsive, repeated habits that focus on one’s own body. They can sometimes cause harm, and negatively alter one’s appearance in some way. The person is often unaware of the behaviors when they're doing it; however, if they are aware, it is usually because they are using the BFRB as a coping mechanism for anxiety or stress.

Some of the more common BFRBs include:

‍Note: There are also people who repeatedly pop their joints or crack their knuckles, but there isn't an official term for this.

The connection between ADHD and BFRBs

Dani Donovan, fellow ADHDer, expanded on the connection between BFRBs and ADHD in one of her TikToks. She said, “plenty of people want to pop a whitehead when they see it, but they don’t because their brain [tells them], ‘Don’t do that! You’re going to scar your face!’”

Donovan also noted that people with ADHD have a harder time with impulse control — and if we do act on an impulse, we often feel guilty for engaging in that behavior, which can lead to the desire to engage in the impulses even more because it’s a source of comfort. It’s a vicious cycle, really.

Many people with ADHD have at least one BFRB — sometimes without realizing it. Personally, when I pop my pimples, I can get lost in doing it for long periods of time. I used to believe that I was dissociating because so much time would pass without me realizing.

I’d get lost in time because the sensation or pain from the picking and popping gave me a moment of satisfying relief. Usually, my mind races around all day — thoughts of what I have to do next, where I need to be later, what I did in the past, and what I would have said differently, etc. Picking stopped that for me — if only for a short time. It became a source of comfort and even a distraction from my anxiety.

But when I finally came to, and realized how much time had passed, it was like an avalanche of guilt and shame came hurling down at me. How could I waste so much time doing something so harmful to myself?

Why are ADHDers prone to body-focused repetitive behaviors?

ADHD brains are often looking for a boost of dopamine because their dopamine receptors aren’t properly picking up those signals. Some research supports the idea that this could be correlated with lower concentrations of proteins called dopamine transporters. Essentially, ADHDers are constantly searching for things that cause pleasure or instant gratification because their brains aren’t picking up that dopamine on their own.

People who are neurodiverse are prone to feeling either overstimulated or understimulated, and sometimes feel the need to “stim” because of it. Stimming for people with ADHD can be triggered by sensory overload or when they're simply trying to concentrate.

Looking back, I recognize that I’ve been stimming from sensory overload my entire life. Scratching, popping, or picking throughout school because I was overwhelmed; popping pimples when I’m around family because of emotional triggers and resulting emotional overload; sometimes I needed to stim because the room was just too… quiet.

How to cope with impulsive body behaviors

What worked for me

I removed the mirrors from my bedroom, put a limit on my time in the bathroom (yes, I set an alarm and everything!), and — my executive dysfunction has me struggling to get to a dermatologist, but — the next step is getting rid of the acne that causes my picking in the first place.

I’ve also found that the old saying about ‘idle hands’ is pretty true for me. I wear rings now so I can keep my fingers busy. You can also purchase stim toys that cover a wide range of sensations, or try making your own with things like pipe cleaners, beads, and other cheap household items.

Talk to your healthcare provider about medication

It’s always good to talk to a doctor about any concerns you have about body-focused repetitive behaviors. So far, my prescription ADHD medication has helped me cope — I don’t feel the need to stim or soothe myself in a harmful way as much anymore.

However, I do notice — at the end of the day, when my medication wears off — that I have the urge to pick again. It’s definitely not a cure all, but it has made a noticeable difference.

Track your behaviors to find your triggers

For me, something that was very helpful — but also inconsistent (because of ADHD, of course) — was tracking and documenting the times when I felt the impulses to do harmful behaviors.

Triggers can sometimes be difficult to pinpoint, especially because our ADHD minds travel a mile a minute. Keeping a small journal nearby while I’m going about the day — or using my phone to jot things down quickly — has made it easier to see the patterns and work towards correcting them.

One last thing that is really important is community. Reach out to people who have ADHD; ask them how they deal with their need to stim or soothe. Find ADHD blogs (like this one!) that provide relatable, accurate, and helpful information. Join an online forum where people openly talk about their ADHD and share personal experiences.

You might come to realize you are not as alone in this as you think.